We recently launched our new website and added a bunch of new Greek fonts to the Pro Font Package.

From now until December 15th, 2016 the GreekHouse of Fonts Pro Font Package is available at 25% off. That’s on top of the 43% discount if you bought all the fonts separately.

If you’re a designer that services the Greek market this deal is perfect for you. With the Pro Font Package you’ll get 34 Greek fonts which include newly released Greek Asian Brush, Greek Bouteeka, Greek Block Serif, Greek Fashionista, Greek Tattoo and Wide Greek Latin fonts. These fonts are currently not offered anywhere on GreekHouse of Fonts so this means you’ll be the first to get your digital designerly digits on these Greek fonts.

Pick up the Pro Font Package today before the pricing jumps back up to $159. 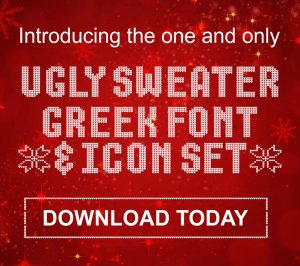 The Ugly Sweater Greek Font is here!
Scroll to top